Teenage swimmer Chelsey Edwards will return home to Upper Hutt tomorrow a gold medal winner at the Commonwealth Youth Games and also an athlete who has experienced the tough lows of top international sport.

Early on at the 2017 Games in the Bahamas, the 16-year-old won gold for New Zealand after swimming the final leg of the mixed 4 x 200 metre freestyle relay.

Along with Lewis Clareburt, Zac Reid and Leticia Transom, Chelsey powered to the team title in a combined swim time  of 7m 50.85. 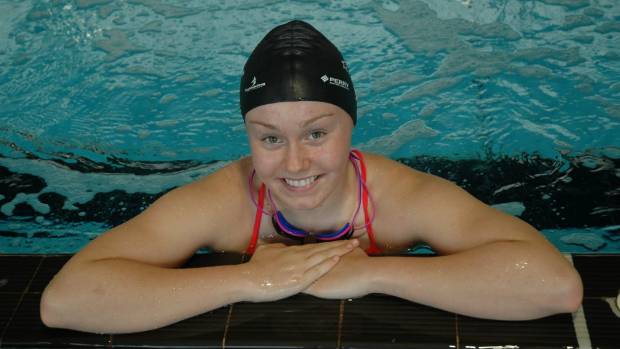 Soon after Chelsey was receiving her gold with her relay mates and later sharing the podium alongside them and three other medal winning teammates on what was a strong day in the pool for New Zealand.

“With winning gold in the relay and being on the podium she was over the moon, just so excited,” Chelsey’s mother, Debbie Edwards said

Chelsey’s golden effort was all the more meritorious as the Hutt Valley SwimZone​ club regular had competed feeling unwell, battling an illness which only developed further and meant she was never anywhere at her best in her solo events.

Debbie Edwards said her daughter left the country with a sore throat and arrived in the Bahamas feeling worse.

“She was feeling pretty bad most the time. I don’t really know if it was the flu or just a nasty cold but she had something before she left and it must have developed.”

A female boxer in the 34-strong New Zealand team also fell ill and the pair were placed in isolation for a couple of days.

Chelsey’s ill health meant she turned in disappointing times in her other swims, including her specialist 200m freestyle.

The Chilton St James youngster finished fourth in her heat (2m 04.94) and outside a place in a final won by Transom in 2m 01.56. She also battled away in the 400 metres, again missing out on final qualification.

“She’s fine now although she still sounds a bit full of it. It’s been tough but these things happen,” Debbie Edwards said.

“Really it all left me feeling powerless and its not the first time she has had a chest infection when competing. I’ve been skyping her as much as I can.

“They were having a day out before flying back and she was looking forward to that but she also told me she has ready to come home.”