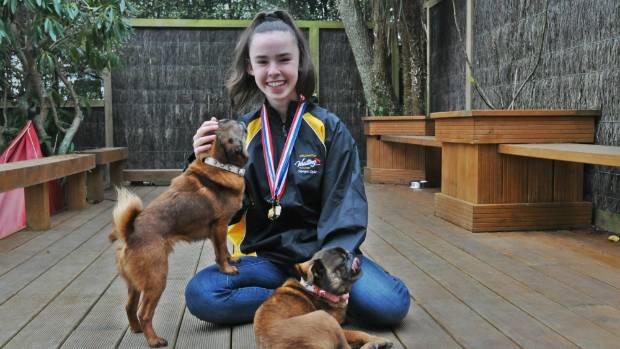 One of Wellington’s youngest sporting successes recalls having to overcome the “grossness” of wrestling with boys.

Now 13, Bareta-Rodgers and the rest of the club cleaned up in the ring at the national championships in Te Awamutu in September with a string of gold medals in both senior mens Greco-Roman and free-style categories.

While the men weighed in at close to 100 kilograms, Olivia came in at 55kg and won gold in both the female cadet 14 to 16-year old category and the junior female 17 to 20-year old categories.

With a lack of competition, they set up a match with a 20-year-old woman, who she also beat.

“My dad wrestled when he was younger. He found the club and thought it would be something cool for me to get into.

“It can be a bit uncomfortable at first because: ooo boys, I don’t want to wrestle with them. You get that in the first week or two.

“But I just really enjoyed it and kept coming back, and from there it escalated. I started winning matches and competitions, and eventually got my first gold.”

The fitness and confidence helped her settle in to her first season playing rugby.

She plays for the under-13s at Wests Rugby Club, where she is the only girl on the team.

“I just kind of got introduced and [met] the team, there wasn’t a big fuss or anything. I’ve been doing wrestling for so long, rugby was just kind of moving into the same thing but with the ball and you run.

“The wrestling experience is knowing how to tackle.”

She hoped to eventually compete in a Commonwealth Games competition.

There are no other teenage girls at the club so Olivia is being coached by Sian Beardsmore (nee Law), who as a 29-year-old Tawa resident became the first NZ woman wrestler to go to the Commonwealth Games in New Delhi in 2010.

“She definitely has a lot of potential. She doesn’t give up and takes in everything we show her.”