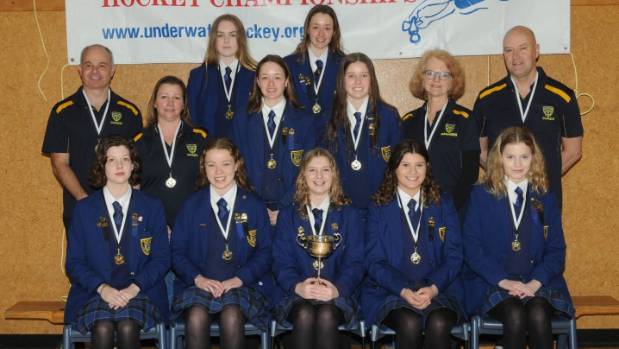 When you’ve waited 32 years for a national underwater hockey title, what’s another 26 minutes?

Well try telling that to the Wellington East Girls’ College team, who endured a marathon final against Whakatane’s Trident High School during winter tournament week, before eventually prevailing 2-1 in overtime to spark emotional and exhausted celebrations.

The team lead 1-0 until the final 30 seconds of the 20 minutes of normal time, but Trident equalised, sending the game to golden goal (first goal wins) overtime. That went for another 26 minutes before East surged and vice-captain Petra Clarkson scored the winning goal.

Making the final even tougher for East was the fact they were pinned in their own defensive end for 20 of those overtime minutes, captain Abby Burdon said.

“Our whole concept was just to keep it on the wall until we were in a safe zone, then push it into the centre,” Burdon said of their overtime tactics.

Burdon explained a lot of the match was played against the wall. What that basically means is the defending team pushes the puck against the pool wall and slowly tries to work it towards the opposition goal. The opposition are trying to steal the puck so they can work it into the centre and score.

Such play can be gruelling.

“The whole game was on the wall,” Burdon said.

“If you’re in defence, it’s on the wall. If you’re on attack, it’s on their defensive wall. In an easy game it’s all in the centre.

“I prefer the easy ones. There is more space. Rather than just brutally bashing into someone, you’re actually using skills and it’s more strategic than up the wall.”

But in a tight final like this one, it was that wall play which came to the fore. It meant it needed a moment of brilliance and energy to break the deadlock.

“It really was just a sudden push of energy from the team that made it [the goal] happen,” Burdon said.

“We cut across the centre in front of the goal and then Petra came through and scored.”

What came next was all a bit of a blur as the team claimed the school’s first national underwater hockey title since 1985, when the competition was between only East and Wellington Girls’ College.

“We were just having quite tearful celebrations, saying ‘it’s over’,” Burdon said.

“It was just one of those things, we won, but we were just so overwhelmed with emotion that it was hard to believe we had won.

“We went into the tournament thinking we would get maybe third, because we didn’t think we’d be able to beat the Auckland teams. Last year we finished behind all the Auckland teams in sixth, which is not a good place.”

So what helped them get their success this year? After all, they went through the season unbeaten, with a record of 36 wins and two draws, with 282 goals for and 21 against.

Burdon gave quite a lot of credit to their coaches, Nicole Baker and Tim Alexander. They devised a formation which played to the strengths of the East players.

It worked so well that Burdon said it needed to remain a secret.

“I can’t say. It’s all confidential. It looks like we’re playing a normal formation, but we’re doing things differently.”

Baker started coaching the team in 2015 because, as Burdon says, “no-one else would”. Alexander joined the following season and have formed a dynamic coaching duo.

“Last year we came second at regionals and didn’t do much at nationals, but you could see that was the turning point,” Burdon said.

“We started to develop as players in the team. This year it showed.”

Another big part of their success was the togetherness of the team. Most of the squad trained up to seven times a week and have been together for a many years, which made the win bittersweet for Burdon as one of two year 13s in the team.

“Personally, winning it makes me want to drop back a year,” she said with a laugh.

“It’s one of those things where it’s a nice way to end it. Finally all this training and hard work since year nine, you suddenly have so much pride. That was my team, we won nationals and changed the ball game for Wellington teams.

“The hardest part is I’ve been playing with these girls since I started school. We all hang out together after school or go get dinner together. It’s not like we’re just team-mates. We’re all really close friends. So it’s going to be hard [leaving].”

Meanwhile, Wellington Girls’, who won back-to-back titles in 2013-14, finished fifth this year, while on the boys’ side Hutt International Boys’ School beat Scots College in the third-fourth playoff.