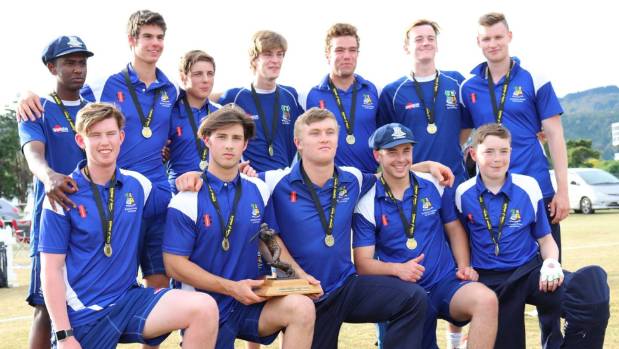 St Patrick’s College have ended a 30-year drought after their tail-enders had the temperament to withstand late pressure and score the required run in a thrilling final over against Hutt International Boys’ School on Saturday.

By beating HIBS by one wicket, with just three balls to spare, St Pat’s have secured their first premier youth grade cricket title since 1986.

“We’ve had many a good player or team go through St Pat’s over the years and the great majority bar ’86 have not even got into this position,” coach Darrin Thomson said.

“We did get into the final in 2015, when we lost to HIBS, so it was tremendous for the boys but particularly pleasing for head of cricket Mike L’estrange who has lived a lot of the ups and downs.”

Pace bowler Will O’Donnell was the star performer in a low-scoring encounter, taking 4-9 to restrict HIBS to 143 in the first innings. O’Donnell collected the key scalp of HIBS batsman Jesse Tashkoff (9) and finished his spell with five maidens.

In reply, St Pat’s opener Xavier Aspell capped off his consistent season with a solid contribution at the top of the order, finishing with a game-high 30 from 90.

But as the wickets fell late in the innings, it was up to tail-enders Ben Piesocki and Josh Mallon to get St Pat’s across the line.

Thomson comment that Mallon is the 100m sprint champion, so his speed between the wickets was never going to be an issue should Piesocki get bat to ball.

After the pair had faced 19 deliveries without scoring, Piesocki kept his cool and eventually hit the winning run.

“Ben is the youngest player in the team but he’s been in that position before, where he has got us over the line three or four times,” Thomson said.

“He did it in Hawke’s Bay in the preseason and he did it in the NZSS trophy against Hutt Valley High School, so we had plenty of confidence him in to get those last runs.”