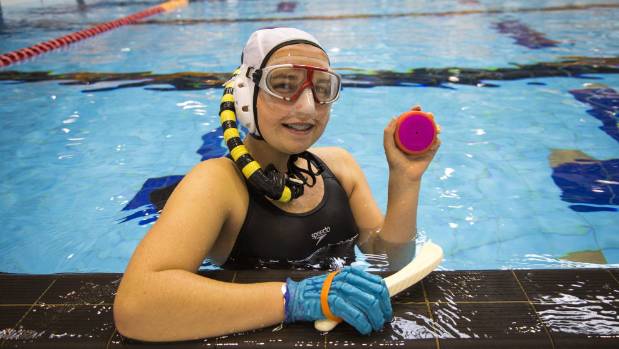 ROSA WOODS/STUFF Belle Burdon is a 15-year-old partially sighted underwater hockey player. She earned a NZ trial last year, as a 14-year-old, despite her condition. Underwater hockey NZ changed all their pucks to fluoro in order to help her see them.

Belle Burdon has ambitions to play underwater hockey for New Zealand. But an eye condition meant she couldn’t see the puck clearly.

So her mum went to the Wellington association to get it to change the colour – and now Belle’s dream is back on course, with the 15-year-old being invited to national trials.

Belle, who goes to Wellington Girls’ College, has played numerous sports throughout her youth, including cricket, football, netball, and swimming.

Cricket was the one worst hit when she contracted Stargardt disease, an eye condition that affects her central vision, three years ago.

“It just makes your life a little bit harder,” she said.

But of all the sports she plays, underwater hockey is her biggest passion, and it was the one she was desperate to continue. Her aunt once represented New Zealand, and she is keen to follow in her footsteps.

However, the eye condition proved a huge hurdle.

“My eyesight doesn’t really disadvantage me in the sport. It’s just the puck was so small that I couldn’t tell where it was, or if I was far away,” she said.

“The goals, they’re fine, and being in the water is fine. It was just the puck.

“It was kind of a browny-orange and, because my eyesight was going, my colour was also going, and there wasn’t enough of a contrast for me to see it.”

Tony Colquhoun, president of Underwater Hockey NZ, said fluoro pink pucks were widely used in international competitions, and at national level, but there was no formal requirement to do so.

In Wellington, some teams used the old ones, so Belle and her mother asked the association to adopt pink ones for all matches.

Other teams were happy to accommodate the change, and all had agreed to the switch.

“It’s almost the international standard, although it’s only one of the two used in New Zealand,” he said.

Most other teams around the country used the pink puck, so Belle should be able to play elsewhere without issue.

Belle said: “Honestly, everyone is behind me and I could talk to anyone and they’ll be happy to help me with anything I need.”

Now able to see the puck much clearer, she has taken her game to another level. She recently received an invitation to trial for New Zealand. However, because of her age, she decided to decline the opportunity, wanting to wait another 12 months before giving it a real go.

“My main goal is just to continue enjoying it, having fun, meeting new people, and probably make the New Zealand team some day,” she said.

10 named in AFL NZ Academy side