Robbie Kerr was out on the cul-de-sac tossing a ball around with his two daughters.

Jess Kerr, his eldest, was batting, while his youngest, Amelia, had the ball in hand. Dad, a former Wellington player, was where he belonged – keeping wickets.

Bowling pace wasn’t working for young Amelia so she started to experiment with bowling leg spin. Somehow, it came out beautifully.

“She was a natural,” Robbie Kerr said. “She started out trying to bowl fast like every other kid in junior teams… but she started bowling leg spin when we were just mucking about in the cul-de-sac.”

Kerr couldn’t offer any wisdom when it came to spin bowling, so he decided to find someone who could.

“I could see that [she had talent], but I didn’t know how to improve it so I tried to find the best spin bowling coach in Wellington,” Robbie Kerr said.

“I was directed to Ivan Tissera, who has coached her ever since, and he’s done a superb job.”

Fast forward seven years, and Amelia Kerr is becoming one of the stars of women’s cricket in New Zealand and abroad, and at the age of just 17.

Given a chance to open the batting in an ODI against Ireland this month, she blasted a world record 232 not out in just 145 balls.

Not to neglect her bowling, she then went out and snared career best figures of 5-17 to produce the finest all-round performance in the history of one day international cricket.

All five of her wickets were bowled. 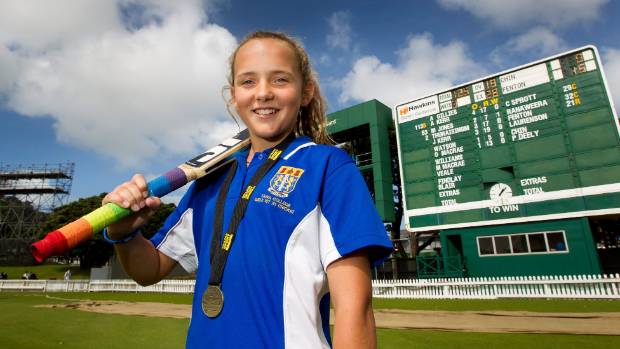 Amelia Kerr, then 13, his the first T20 hundred at the Basin Reserve, for Tawa College 1st XI girls cricket team.

This was a girl who scored a Twenty20 century at the Basin Reserve when she was just 13, bashing 113 from just 65 balls for Tawa College against Wellington Girls’ back in 2014.

Years earlier, she was that slightly annoying little sister, joining in with the older girls during Milo cricket games and trainings.

“She’d be lapping it all up and joining in. I think they had Sara McGlashan come along and do a training session with the intermediate girls and Melie would be the little sister who would go and join in.

“She loved all that.”

Two years later, when she was old enough to be playing in boys teams at school, Kerr would get frustrated with her batting.

The problem was she just wasn’t as strong as the boys she was playing against.

“Melie really wanted to be able to bat. She had conversations with Rob afterwards because she was frustrated she couldn’t hit it to the boundary easily.

“She always looked up to and loved watching Kane Williamson bat, how he would work the ball around, so she was always looking at ways of scoring runs when she didn’t have the strength when she was younger.”

Often in cricket, the environment you play in when you’re young can shape the way you play when you’re older.

For Amelia Kerr, her early days meant she worked on her technique and placement of the cricket ball while batting, and developed the mental side of her game.

While the boys were using brute force to slap the ball to the boundary, Kerr was grinding away, accessing every area of the park in order to score runs.

Of course, now she has the strength to hit and clear a boundary rope.

Against Ireland, in that stunning 232 not out, Kerr struck 31 fours and two sixes, some of which showed the kind of force and power she could only have dreamed of as a junior cricketer.

Her power game is put down to tireless work in the gym and in the nets.

“Andrew Smith with the Firebirds, he does a lot of stuff with her when she’s in Wellington,” Murray said of Kerr’s strength and conditioning work.

“And Nick Webb has been involved from the beginning with the White Ferns. She definitely puts a focus on that stuff.” 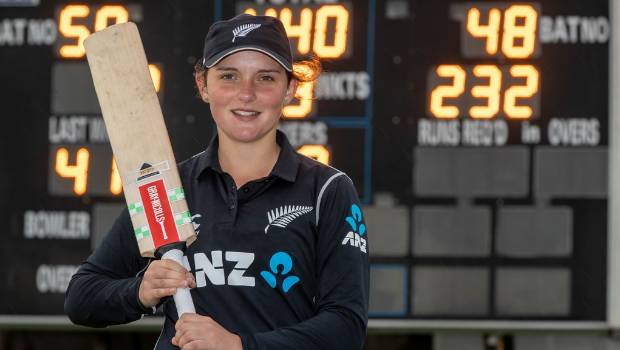 Amelia Kerr after she broke the world record for the highest women’s ODI score.

Kerr is still a student at Tawa College, so it’s tough to imagine how she fits everything in.

That doesn’t mean she neglects her school work, though.

“I know she was talking about an English assignment the other day, but she’s very organised,” Robbie Kerr said.

“Prior to the tour she worked hard and she caught up with her school work from the West Indies tour, and then got ahead.

“She’s tracking really well, and I think the school work here is a welcome distraction rather than a stress or anything.”

Robbie Kerr said her standard day can be intense when she’s in New Zealand, but she gets her work, school and free time balance just right.

“Her day is, get up early, she might do a gym session or sometimes have a hit with Christie van Dyk before school, then she fits her school day in.

“After school it’s normally two, two and a half hours of some sort of training, whether it’s batting, bowling, fielding or strength and conditioning.

“She’s always tended to keep her weekends free, and I think that’s a good thing. Initially I used to think the weekend is such a good time to fit in a few hours training, but now I’ve come around to thinking, no, it’s very healthy to get your work done during the week and have that nice time out of cricket with friends and family.”

It’s that kind of hard work that has seen Kerr rise to the top of the game.

She comes from a cricketing family, which helps. The talent has always been there – it’s in her DNA.

Robbie Kerr played for Wellington between 1993 and 1998, mainly as a list A player. He scored four fifties for the province.

Jo Murray was also a Wellington representative, playing for an earlier iteration of the Blaze.

Grandfather Bruce Murray was the best of the lot. He’s 60 years older than Amelia Kerr, almost to the day, but you can see a lot of his game in the young star.

For Wellington, Murray scored more than 6000 first class runs, and had a top score of 213. His granddaughter just surpassed that score, in a 50 over game.

“Growing up, I remember knowing he scored his double hundred for Wellington,” Jo Murray said. “They’ve had the best week ever.

“We spoke to dad the other day and he was just saying he’s heard from so many different people, even people he hasn’t spoken to for 50 years, so he loves the fact that it’s reconnected him with a whole lot of people.

As are her parents, clearly, and they have no doubt about who the most talented cricketer in the family is.

“There’s no comparison,” Robbie Kerr said. “She’s considerably better in every department of the game.

“Her work ethic is very, very good, and I think her mental game is fantastic. She’s a very good thinker on the cricket field, very level headed, and tends to make good decisions consistently.

“She has a great cricket brain.”

She started on a quiet cul-de-sac in Tawa, and now Amelia Kerr is taking the cricket world by storm.