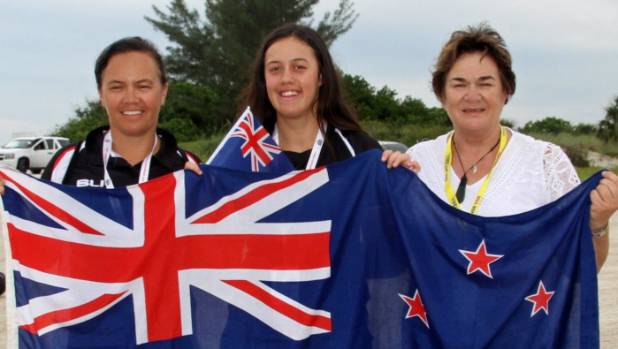 Denva Shaw-Tait was destined to be a softballer but at 17  she has achieved a notable milestone for a family that has always enjoyed success on the diamond.

That was no surprise to those who have followed her career with Saints, Hutt Valley age grade teams and with the Junior White Sox.

What makes the achievement notable is Denva’s mother, Kiri, and grandmother, Naomi, played for the White Sox.

Naomi Shaw captained the women to their only World Series win and is generally regarded as New Zealand’s best ever female player.

Kiri debuted at 16 and went on to have a long career highlighted by an appearance at the 2000 Olympics in Sydney.

Although no one is quite sure, it is believed they are the first three-generation international softball family in either the men’s or women’s game.

It is an achievement that Naenae College can also be proud of. Denva and Kiri were selected while still students and Kiri now teaches at Naenae. Naomi went to Taita College but had a long career at Naenae where she was highly regarded for her commitment to the students.

Initially Denva concentrated on netball and basketball  and was seen as a top talent in both codes.

She also starred for Hutt Valley softball at age group level and this year decided to concentrate on that code, as she prepared for the Junior World Series in Florida.

The team’s assistant coach was Kiri and, in typical Shaw fashion, Naomi was also in Florida to watch the tournament in July.

Denva performed strongly and Naomi said it was hard not to be impressed with the way the youngster rose to the  challenge of playing at a higher level.

Naomi believes that her dedication to training and ability to perform under pressure for the juniors, was what caught the White Sox selector’s attention.

“I am absolutely pleased for Denva. Softball is a real passion for us. I think her selection was deserved, even if I am her grandmother.”

Denva learned of her  selection by email.

“To be honest I was not expecting that. I knew I played pretty well at the worlds but I did not have a clue I would make that squad.”

Her aim now is to train hard and force her way into the senior team with an eye to playing at the 2020 Olympics.

She is also hoping to pick up a scholarship to an American university.

Denva is not the only member of her family making a name in sport.

Her brother Sage is in the Hutt Valley Under 17s boys team, coached by Kiri’s partner Craig Wallace, which won a national title.

Earlier this year, the 16-year-old centre also captained the Wellington Under 16 rugby team and won a national touch title.

Younger brother Zahr played for the New Zealand Under 13 baseball team earlier this year. Twin sister Mesha is shaping up to be a top pitcher.

Kiri said having four children playing sport created  both a headache and a pleasure.

“It is bloody chaos at times … if the kids love something and put in the time and effort, we get a lot of pleasure watching them.”

* Two other Hutt Valley youngsters, Mikayla Lewin and Pallas Potter, have also been added to the training squad.