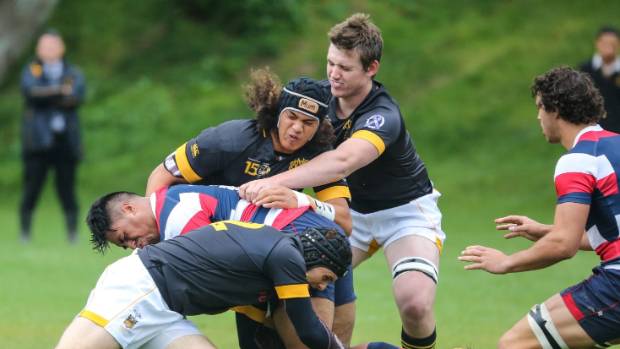 Naitoa Ah Kuoi must get some curious looks from opposing players.

Here is a rugby player who models his game off heroes Akira Ioane, Brodie Retallick and Brad Thorn.

The Wellington College lock, who tips the scales at 110kg and stands at 1.93m tall, is one of the country’s most promising players, having just made his debut for the New Zealand Schools team.

But deep down, Ah Kuoi is a mumma’s boy. Just take a glimpse at his headgear.

Ah Kuoi can’t remember when it was exactly, but a couple of seasons ago he wrote the word “mum” on the strapping tape around his wrist before running out on to the field for Wellington College.

Now opting to wear headgear, following a knock to the noggin while playing for the Hurricanes under-18 team, the message to mum is now much easier to spot.

But when asked what the story behind it was, Ah Kuoi said there was no “deep” meaning behind it at all.

He’s just a mumma’s boy and wanted to do a shout-out for his mum whenever he took to the rugby field.

“My mum liked it but my dad is a bit iffy. He’s wondering where his name is,” Ah Kuoi joked.

“But I’m just a mummy’s boy through and through.

“A couple of the boys didn’t want to ask me because they thought it’d be something really deep but I just said it’s because I’m a mummy’s boy. Some people find it funny and some people mock me but it is what it is, I do it just do represent my mum. I’m not too fazed.”

As for playing for the New Zealand Schools team, the ultimate honour for any secondary schools rugby player in the country, Ah Kuoi was thrilled to achieve such a significant milestone in his fledging career.

“It was a goal since the start of the year so to get this ticked off I was pretty happy.”

The 18-year-old scored twice as New Zealand made light work of Fiji, winning 54-7, before backing that up with another strong performance in their 34-11 win against Australia.

“We definitely wanted to come in there and put teams away and I think we did. The Australian game was a bit different, it was a bit slower but in the end we did get the win which is what we were aiming for.”

After having a hip operation last week, Ah Kuoi is expected to be sidelined for the next six months. He has committed to playing his club rugby with Marist St Pats though, hoping there will be sufficient time to stake his claim for Wellington under-19 selection at some stage during 2018.

“I’m pretty sure I’ll be back in the second half of the season next year so I’ll be definitely looking to be part of that [Wellington under-19] team because it is a stepping stone for the next level.”

As for his future ambitions, Ah Kuoi hopes to crack Mitre 10 Cup and Super Rugby.

“I had a few offers to move elsewhere but in the end I’m too loyal to this city and it is definitely a dream to play for the Lions and to play for the Hurricanes,” he said.

“I’m in the academy next year so that’s the first contract I’ll be having but hopefully when I’ll be playing some footy again it’ll increase to bigger and better things.

“From year 10 onward I was definitely just focussed on school rugby so now that’s all over and I won’t be playing school rugby again it’s definitely exciting. The injury will be a new challenge but I’m really excited for the new year, taking on some big challenges and hopefully trying to make a career out of it.”