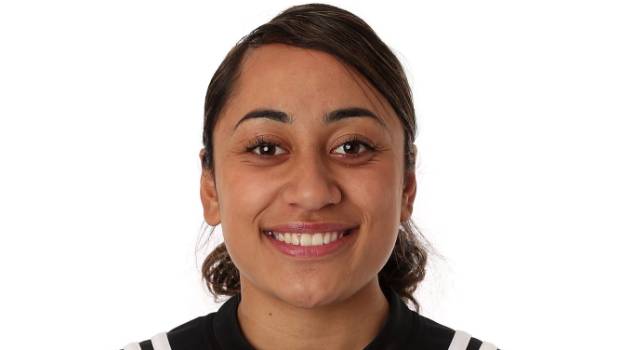 Dhys Faleafaga is itching to make her Black Ferns debut

Life as a contracted Black Ferns rugby international is even more hectic when you’re still at school, Dhys Faleafaga has discovered.

At 5.50am she’s on the motorway from Porirua to get to her gym sessions at Wellington’s Rugby League Park.

After a shower, she gets into her school uniform and drives across town to St Mary’s College.

By 6.30pm she’s back at training, then travels home to Porirua, all to do it over again tomorrow.

And if she doesn’t have a session planned with her trainer, you’ll find her in the gym doing self-directed extra sessions.

It is safe to say Dhys Faleafaga has more on her plate than the average 17-year-old.

The St Mary’s College student was named in the Black Ferns squad in May.

Unlike the other squad members who are studying or working, Faleafaga is still at school.

She admits that being both a student and rugby player is challenging, but she wouldn’t have it any other way.

“It’s been hard, because I’m not good with time management,” she says.

“It is a good challenge for me.

“I’ve had lots of support from my parents and teachers, making it easier to cope with school and rugby.”

​Faleafaga says the Black Ferns and New Zealand Rugby have been very understanding of her school commitments.

“They have been really sensible with my time management and understand if I can’t commit to some trainings.

“They (NZR) provide me with my trainer, the gym, gear, physios, and psychologists.”

Not only is her school and rugby balance difficult to juggle, but so is her social life.

“I have to sacrifice heaps of my time with friends a lot for training. It’s hard, but they all understand that sacrifices have to be made.”

Asked how she felt when first being told she had been selected as a contracted player, Faleafaga said she was shocked.

“I couldn’t believe that they were offering me a contract.”

Despite having many great rugby memories, her first Black Ferns camp was her outstanding rugby moment.

“It was my first time being with all the girls. Experiencing being in the Black Ferns culture is something that you can’t get anywhere else; seeing them train, they are the best female rugby athletes in New Zealand.

“It was a privilege to be there, just to train.”

Faleafaga was first introduced to playing rugby when she was just five.

However, that’s not where the dream started.

“I stopped playing in the same year I started because I was actually scared to play rugby.”

It was only two years ago that Faleafaga took up the sport again, with the help of her tight knit St Mary’s College “sisters”.

“Once I played for my school, the sisterhood within St Mary’s made me want to play rugby.”

After playing rugby for her school, opportunities within women’s rugby arose, which Faleafaga took with both hands. Dhys Faleafaga is tackled during the Farah Palmer Cup match between Canterbury and Wellington last year.

“I set myself some goals to try and make representative teams first, and it just went up from there”.

Faleafaga was surprised about how quickly everything was happening.

“I didn’t expect myself to make teams. I was shocked, I didn’t think I was that good”.

It wasn’t until last year after making the New Zealand Black Ferns development team that the loose forward realised her potential to pursue rugby as a career.

“When I was being looked at during Black Ferns trials, I was very grateful that I was in that programme.”

​Dhys is not the first Faleafaga to excel. Her older sister Lyric, 19, was selected in the 2018 Black Ferns sevens squad.

“Lyric set the bar when she made the Black Ferns sevens. I always aimed to get where she is.”

Their parents Tim and Vanessa played for Northern United, notching up more than 200 games between them.

Faleafaga says she is very grateful to be part of the Porirua-based club.

“Norths has been a huge support, not only to me and my sister, but to my parents as well”.

“Growing up in that environment has broadened my interest in rugby”

To Faleafaga, her sister and dad have played key roles in her development both on and off the field.

In 2017, Faleafaga made her debut for the Wellington Pride and scored two tries in three appearances.

She was unable to be selected for the Black Ferns tests against Australia last month due to injury, a New Zealand Rugby spokeswoman said.

She will be in line to make her debut in the end of year northern tour, if fit and selected.